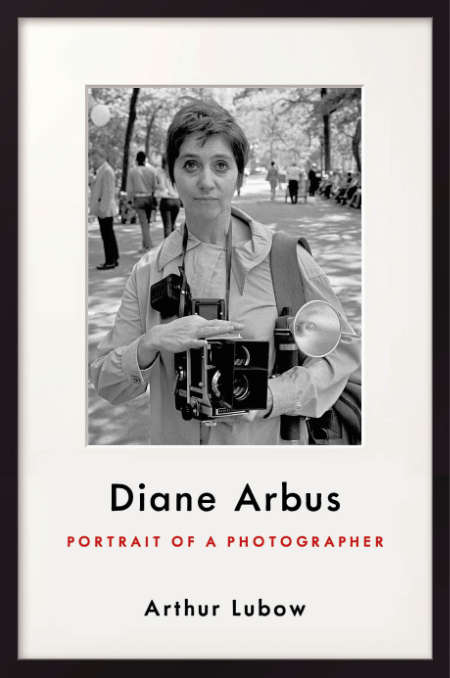 Diane Arbus: Portrait of a Photographer brings into focus with vividness and immediacy one of the great American artists of the twentieth century. Arbus comes startlingly to life on these pages, a strong-minded child of disconcerting originality who grew into a formidable photographer of unflinching courage. Arbus forged an intimacy with her subjects that has inspired generations of artists. Arresting, unsettling, and poignant, her photographs stick in our minds. Why did these people fascinate her? And what was it about her that captivated them?

It is impossible to understand the transfixing power of Arbus’s photographs without exploring her life. Lubow draws on exclusive interviews with Arbus’s friends, lovers, and colleagues; on previously unknown letters; and on his own profound critical insights into photography to explore Arbus’s unique perspective and to reveal important aspects of her life that were previously unknown or unsubstantiated. He deftly traces Arbus’s development from a wealthy, sexually precocious free spirit into first, a successful New York fashion photographer and then, a singular artist who coaxed secrets from her subjects. Lubow reveals that Arbus’s profound need not only to see her subjects but to be seen by them drove her to forge unusually close bonds with these people, helping her discover the fantasies, pain, and heroism within each of them, and leading her to create a new kind of photographic portraiture charged with an unnerving complicity between the subject and the viewer.

Diane Arbus: Portrait of a Photographer brushes aside the clichés that have long surrounded Arbus and her work. It is a magnificently absorbing biography of this unique, hugely influential artist.

“Arthur Lubow’s compelling new biography about the revolutionary photographer Diane Arbus brilliantly demonstrates how the emotionally fragile state of an artist can be channeled into something wondrous….The image of Arbus that emerges from Lubow’s superbly crafted text, which draws on exclusive interviews with those who knew her intimately, is an extremely disturbing one….Lubow is a talented and sensitive writer, and he doesn’t shy away from confronting the controversies that shadowed Arbus throughout her career.”
—Elaine Margolin, Washington Post

“It’s another summer of Diane Arbus…and she is more dominant, it seems, than ever….Now comes Diane Arbus: Portrait of a Photographer (Ecco, 752 pp., **** out of four stars), Arthur Lubow’s big, sharply focused, disturbingly intimate biography….Lubow’s deeply researched and muted narrative…reads definitively. Arbus devotees may know the outlines, yet Lubow breaks new ground….Lubow chronicles Arbus’s rise and fall with a novelistic intensity that plumbs the decisive moments of a driven, unsettled soul. Along the way, he explores the complex intersections of her life and art, and delivers a major work that helps us see how Arbus saw, and how she told single-frame stories that keep speaking to us.”
—Matt Damsker, USA TODAY (4-star review)

“…this enormous and enormously satisfying biography…Told in short precise chapters evoking a literary version of Arbus’s stark photographs, Lubow’s biography proposes a kinder, gentler Arbus than the one in the popular imagination….Leaning on years of reporting, Lubow makes many new, brilliant observations…ultimately, this compelling book shows an Arbus that is as mysterious as her best photographs.”
—Rachel Shteir, Boston Globe

“The epic story of Arbus’s life is retold in Diane Arbus: Portrait of a Photographer, Arthur Lubow’s magisterial new biography….Lubow’s 734 page doorstopper is sure to stand as the definitive telling for at least a generation.”
—David Freedlander, ARTnews

“The portrait he draws of Arbus is three-dimensional, sympathetic, neither prurient nor exculpatory, diligently sourced, and recognizably the same person who photographed with such cunning, bravery, shivering insight, and outrageous abandon….I finished Lubow’s book more impressed than ever by the dazzling aura of her personality, the depth of her artistic convictions, and by her reckless vulnerability….Lubow documents in colorful detail her travels in the demi-monde, on assignments and self-directed. But equal space is devoted to her family, friends, and colleagues…Reviews of Lubow’s book have called his disclosures “titillating” or “sensational.” This is grossly unfair. He hasn’t reported lubriciously on Arbus’s behavior or moralized about the loose sexual ethos of the ‘60s….One cannot read his book without thinking what a privilege it must have been to know her, or to be related to her. Her photographs are no more or less disturbing than they were before. If anything, the images seem even more ethereal and detached from the gravity of biographic fact.”
—Richard B. Woodward, Collector Daily

“While compilations of her work have been published before, in this book Arthur Lubow mines correspondence, interviews and other documents to show us the Arbus behind the images that have made her so recognized in the world of photography….Lubow gives us a bigger gift — a good, long look into who Arbus was and at the photography legacy she left us.”
—Beatriz Terrazas, Dallas Morning News

“With 12 years of scrupulous research and a critic’s eye, Lubow turned a routine magazine assignment for the New York Times into the defining biography of photographer Diane Arbus….Relying primarily on interviews with friends, lovers, and colleagues, as well as Arbus’s previously unavailable correspondence, Lubow provides not only a comprehensive assessment of her groundbreaking work but, perhaps more significantly, a revealing documentary of Arbus’s often-tortured life.”
—Publishers Weekly (starred review)

“Drawing on a huge number of interviews, related archives, and Arbus’ several publications, the author produces a thorough, sympathetic portrait of a complicated woman who, from childhood on, stood out as ‘totally original’….Lubow sharply captures Arbus’ restlessness, pain, and artistic vision.”
—Kirkus (starred review)

“Lubow devoted a dozen years to this exacting and inclusive biography, seeking to achieve ‘all the detail and clarity that [Arbus] prized in her photographs.’ With unprecedented access to private material, he illuminates with arresting intimacy Arbus’ ‘passionate curiosity,’ mischievousness, penchant for secrets and risk, haunting sense of detachment, and damaging relationships…. Lubow brings equal insight to his meticulous chronicling of Arbus’ metamorphosis from a New York fashion photographer working with her husband to a lone explorer in the underworld, ‘savoring flamboyant display’ and instigating erotically charged collaborations with her subjects in pursuit of photographs ‘that told the truth.’…Lubow’s portrait is the most sharply focused, encompassing, and incisive to date.”
—Booklist (starred review)

“Lubow is entering a crowded arena, for the Arbus industry is hardly a place of repose. Yet the author fights for his spot, and earns it. His research is unflagging and his timing is good, for Arbus could hardly be more fashionable….”
—Anthony Lane, The New Yorker

“Mr. Lubow is unflagging in his effort to understand Diane Arbus and to unravel her many persistent mysteries…his ‘more is more’ approach also builds on itself as the book goes along, giving you the sense that you are learning about the history of photography as well as about Arbus….I came away with a renewed sense of this sphinx-like woman’s singularity and courage….”
—Daphne Merkin, Wall Street Journal

“Arthur Lubow, a journalist, confronted a figure heaped in myth, an artist-suicide whose work cannot be disentangled from the tragedy of ­her depression and death….The biographer is forced to take a stand on Arbus, even today. Lubow went armed. The book is based on substantial interviews with Arbus’s friends, lovers and others, and on documents that hadn’t been available until now….Lubow charts every up and down of Arbus’s sexual and emotional life…the book reads more like a novel — salacious, mysterious (another favorite word of hers) and harrowing.”
—Lyle Rexer, New York Times Book Review

“The biography Diane Arbus always deserved….Arbus was larger than life, but she wouldn’t admit it; she played small; she listened until it was time for the seduction….Lubow makes this clear in his masterwork of a biography….Through 85 snappy chapters organized into seven parts, Lubow lays out a wide field of personal and professional testimony – psychological, aesthetic and cultural…Lubow does a masterful job locating the train of people who touch Arbus’ life during a hot time in U.S. culture….These are overripe characters in a volatile time.”
—Anthony Bannon, Buffalo News

“…intimate and sympathetic…adept at situating Arbus within the history of photography…will serve as an indispensable, if not incontestable, starting point in understanding the photographer, her art and the links between the two.”
—Julia M. Klein, Forward

“With vivid details and acute insights, Arthur Lubow, an exceptionally talented writer, has brought to life a unique and enduring artist. Through her camera, Diane Arbus gave us an enlarged view of human nature. This book shows who she was and how she did it.”
—Gay Talese

“Diane Arbus photographed eccentrics, weirdos and freaks.  Before shooting a single frame, however, she took the time to establish a genuine bond with her subjects so that her photographs, while bold and unsparing, were also deeply sympathetic.  Arthur Lubow has approached Arbus in much the same spirit, and the result is a perceptive, engaging and profoundly moving portrait.”
—John Berendt

“Arthur Lubow’s biography is based on his new and original research and reveals Diane Arbus in a startling light. He’s talked with a number of people who were very close to her, recorded the conversations, read extensive unpublished correspondence and brought all that together in a fast-moving narrative style that reads like an eyewitness account. He gets inside both the person and the persona. This book both analyzes and contributes to the notoriety and fascination with one of the most complicated figures in the history of photography.”
—Jeff Wall